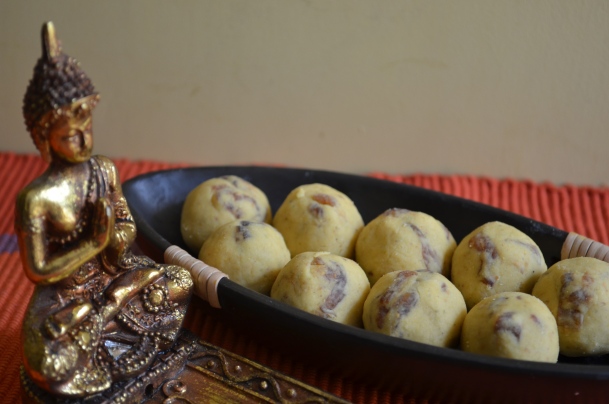 What a week of cooking, shooting, posting and reading up on delicious dals! Thanks to Blogging Marathon being hosted by Srivalli of Spice Your Life, it brought a lot of discipline into my blogging – a commitment to blog every single day (if only for a week), sticking to a theme (I chose dal/lentil) and participating in discussions, reading up on what the others have done and bookmarking interesting recipes from those.

It gave me an opportunity to innovate a lot, trying to come up with healthy alternatives to some high-calorie dishes, to increase the usage of sprouts (I managed a cup every single day!) and to learn many more new dishes, some that I had only heard of, some that I have tasted and others that were on my list of have-to-hunt-out.

As a fitting end to this week of a high-protein diet, I wanted to prepare some festive dish. I was chatting with my mother the other day and she suggested I could prepare laddus (sweetmeat balls), something I haven’t tried before. So, that’s how I ended up preparing these Maa Laadus (laddus made of roasted gram/bhuna chana). I realised intimidating-looking dishes can actually be pretty simple if only you try them with a positive approach!

To the traditional laddus, I added some chopped figs and powdered almonds to increase their nutritive value.I also tried some east-west fusion by rolling some of these laddus in cinnamon sugar, which gave them a major flavour twist. Enjoy! 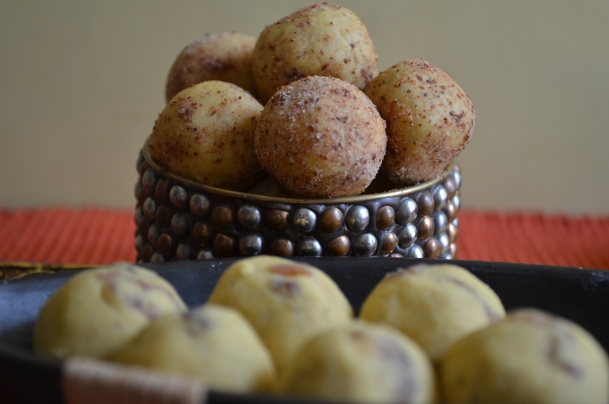 Powder it fine along with almonds, cardamom and sugar

Mix with your hands and add more ghee

Roll into smalls balls of any size you prefer

Add ¼ tsp of cinnamon powder to 1 tsp of powdered sugar, mix well and roll the laddus in it for Cinnamon Maa Laadu