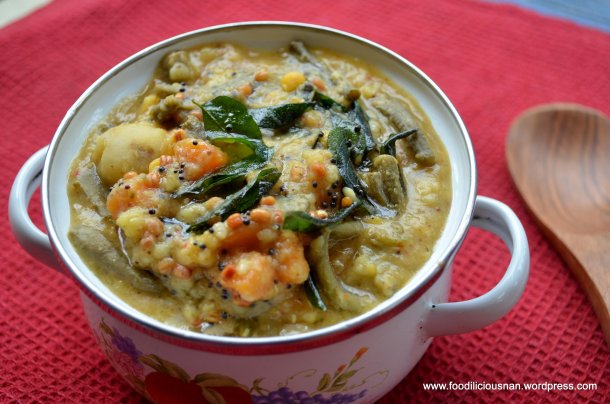 We aren’t the surprise-giving kinds – the husband and I. The other wives in our friend circle often reach out to us to plan surprise birthday parties for their husbands – photo collectibles, specially planned dinners, midnight surprises with a group of friends, funny gifts delivered by unexpected people at unexpected places – you name it and we’ve co-conspired with them in planning their big bashes.

As for ourselves, we’re often clueless about what to gift the other. I, most predictably, bake a cake and join in with my son to make some “greeting card”, which is usually a sheet of paper with some scribbles on it. The husband normally takes me out for dinner at some new place that catches my fancy at that time. Last year for his birthday we went out for a movie – a night show – the first in three years after the birth of our son. We put him to sleep a little earlier than usual and stepped out excitedly. Oh! Lest your imagination takes off thinking it must be some rom-com at the very least, let me clarify that the movie was pure art-house fare – Kaaka muttai (crow’s egg) – that won some national awards.

Before the movie, we also managed to catch some dinner at a posh Mexican restaurant close-by, where I drank more glasses of water for all the spice in the food and the hubby nearly choked on a largish bit of mango in the season-special mango salsa that the place dished out for us. Well, how one could choke on a piece of mango (of all things!) is a question you’d better ask my hubby!

The same year, for our anniversary, we went out to an interesting restaurant. We took turns running behind our little boy – the man ate while the little fellow and I explored the restroom and the cleaning equipment in of the restaurant and I ate while the father took his turn with the little fellow following a bright-coloured insect around the waiting room of the eatery.

Well, I’ve kind of summed up the sort of “surprises” life throws at the two of us because we fail to take up the responsibility for the same! So, I nearly fell out of my chair when on my birthday last year hubby called on the way back from office asking me to be ready for a surprise. For one, by the very nature of his announcement, the surprise was thrown out of the window, but for the kind of couple we are, the man could just not hide his excitement at having planned something without letting me in on it. He got a lovely hand-block-printed cotton saree dyed with natural colours and subtle junk jewellery to go with – just the sort I’d have picked up if I went myself. 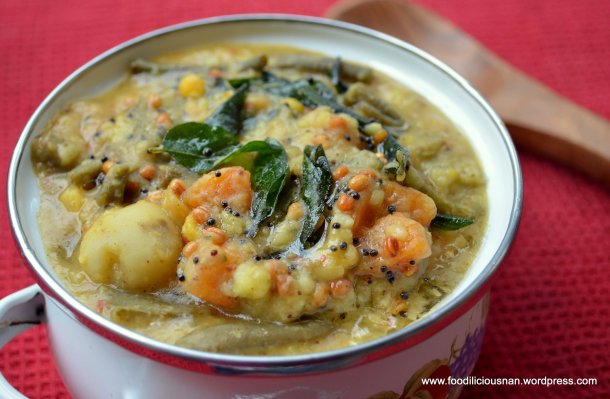 I was touched with his effort. The best way was to cook up something special – no fancy cuisine, simple traditional south-Indian fare is what he’d most appreciate.For one of the subsequent week-night dinners, I made a poritha kootu – my maternal grandma’s recipe. My man isn’t big on kootu, but this particular way of preparing it – typical Tam-Bram style with loads of ground coconut, red chillies and roasted black gram is one he really likes. This particular style of roasting black gram and red chillies and grinding them together gives it a flavour profile similar to a thogayal.

I’ve blogged about many traditional ways of making kootu, with one being from the same paati, but this simple one isn’t on the blog. So, here it is, paati’s poritha kootu:

*I’ve used a mix of beans, potatoes and carrots. You could also use veggies like cabbage, white pumpkin, green peas and all sorts of beans and gourd vegetables on their own or any combination of those

Heat 1 tsp of oil and add 1 tbsp of black gram when the oil is hot. Remove from heat when the gram turns golden-brown. Add the asafoetida and red chillies to the pan and let them cook in the ambient heat. Cool and grind to a coarse powder along with the coconut.

Add the cooked green gram, a quarter cup of water and cooked vegetables in a large non-reactive vessel and bring to a boil. Add water to adjust consistency*

*My mum and grandma add up to a cup of water and kootu is served to be mixed with rice, while I keep it thick as my husband prefers it as a thick side-dish to sambhar/rasam-rice

Reduce the heat and add coconut-black gram-red chilli powder and salt to taste. Remove from heat after a couple of minutes

Heat oil in a small pan. Add mustard seeds. When they crackle, add curry leaves and pour over the kootu. Ready to serve!