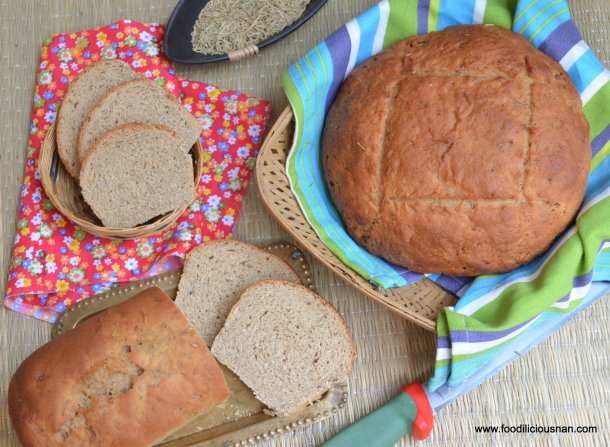 “Hey, I’m in India for a wedding. I’m free late tomorrow evening. Can you come over? And yes, I’ve got your book.”

A message from my cousin’s wife I had been waiting for. Last year, hubby went to London on an official trip and I handed him a wish list of baking items (ingredients, tools, pans etc.) that was bulkier than the biggest official papers in his suitcase! Well, hubby being the lovely hubby he is, got me almost everything on the list. My cousin’s wife graciously took him around the city and helped him with my list too. In fact, I had mailed her a copy of the list so could pre-order some of the things online. “The book” was one of the things on the list. Sadly, the book never reached in time and hubby got back to India with everything on the list except the book.

I’ve been a bread lover for as long as I can remember. Sandwich was standard lunch box fare in my school-going years. I still cherish the sort of sandwich mother used to make for me back then. Some coriander chutney slathered on one slice of bread, topped with mashed boiled potato, some tomato ketchup, onion and tomato slices and covered with another slice of bread – yum was the word!

But it took dozens of brick loaves before I could bake some decent bread at home. Ever since I started baking bread, I wanted to buy a GOOD book explaining the science behind yeast and its reaction with flour and water that makes delightful breads. Once I started taking orders for bread, I wanted to learn the art of bread baking in a more organised manner. Peter Reinhardt’s The Bread Baker’s Apprentice was one book I was really looking to lay my hands on. So, when hubby went to London for work, this was the first thing I asked him to buy!

Somehow, the book was destined to reach me much much later. But everything in good time. Each new recipe that I try from the book, I follow to the T a few times to understand it in and out before I start playing around it. The biggest challenge is always in suitably modifying the white flour recipes to whole wheat ones. 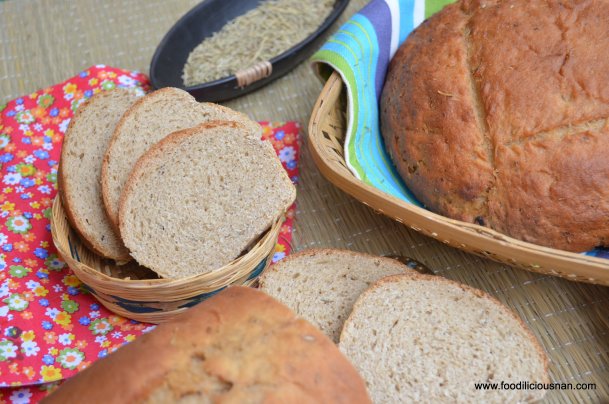 The recipes are all really fool proof, even though it takes me a few attempts to get the perfect result with whole wheat. This panmarino bread, for instance, took me two attempts. The first one turned out too dense even for my own liking, and I ended up making some bread upma with it! The third attempt though was super good. I find that I need to add additional water than the recipe suggests or to reduce the flour a bit when working with whole wheat. I must confess though that I have been adding a bit of vital wheat gluten to some of the breads. Our Indian wheat has lower gluten content than its Western counterparts, which leads to a loaf of bread that is denser than one made with wheat that has higher protein content (like bread flour or even the whole wheat flour available overseas). Which probably also explains why there are more flatbreads in India and the middle east and loaves of bread in Europe and the Americas. The use of a biga or a poolish (both are types of pre-ferment) helps tremendously in breads made with Indian wheat, even without the use of added wheat gluten.

Coming to today’s bread, the panmarino is an Italian bread seasoned with rosemary. The bread was part of the Bread Baking Babes bread this July. I have a soft spot for savoury herb breads and this one was very tempting. Although neither the BBB panmarino recipe, nor other recipes online use potato in the bread, Peter Reinhardt’s recipe does and that is the one I follow. He mentions in the book that the potato is used to lend softness to the loaf. The bread was a resounding success with everyone at home – my in-laws (who’re aren’t really bread lovers) and I had it for dinner with soup and my hubby and 2-year-old kiddo had it for evening snacks with tomato ketchup. The next day I used the bread to make another dish that I’ll put up later this month. The loaf kept well at room temperature for two whole days.

If you have any plans to try a 100% whole wheat loaf anytime soon, try this. The recipe uses no sugar/honey/molasses etc, and still the breads got the most wonderful brown crust. Hubby says that could have been from the natural sugars in the potato. Whatever it be, it was one of the loveliest breads that I have attempted so far from the book and one that I make most frequently second most after the multigrain one that I bake quite often. Give this a shot and let me know how it goes for you!

* You can use unbleached bread flour/maida in place of the whole wheat. I used whole wheat and added ½ tsp wheat gluten to it

Take a large bowl and dump flour into it. Add yeast and mix well

Use your hands and knead the dough well for about 5 minutes till the dough becomes soft, supple and pliable

Once almost doubled, knock down the dough and refrigerate overnight. This can stay in the fridge for three days or in the freezer for up to 3 months

For the final dough:

All of the biga prepared earlier

Whole wheat flour* – 3 cups (can use bread flour, if available, or maida too)

Chopped roasted garlic – 4 tbsp (I did not add it)

In case your biga is refrigerated, remove it about an hour before you plan to mix the dough. Cut it into 8-10 pieces

In a large bowl, stir together flour, salt, pepper and yeast

Mix into a shaggy dough with a large, strong wooden spoon

Transfer the dough to your floured kitchen countertop and knead well for ten minutes. Do not skimp on this step, especially if you’re working with low protein wheat flour like Indian atta

Oil the same large bowl and place the ball of dough in it. Cover it with a lid and set aside till it doubles in size (45 minutes – 2 hours depending on the heat and humidity of the place you live in)

Shape the bread: Once the dough doubles, you can either shape it into loaves and place it in your bread pans or shape into two large boules or even smaller dinner rolls (you’ll get 18 dinner rolls according to the book). I made one sandwich loaf (check this video for shaping a loaf) and one large boule (here’s how you shape a boule)

Cover the dough with a kitchen towel or with a plastic wrap. Let it proof at room temperature till it doubles in size

Bake the sandwich loaves or large boules for 35 to 45 minutes and the dinner rolls for about 20 minutes. Rotate the pan midway for even baking

Remove the bread from the tin/pan immediately and transfer to a cooling rack. Let cool completely before slicing, else the bread will crumble

This is my post for alphabet I for the blogging event titled Around the World in 30 Days , a special bi-annual version of the  Blogging Marathon hosted by Srivalli.

For more recipes from countries that start with the letter I, check this link: