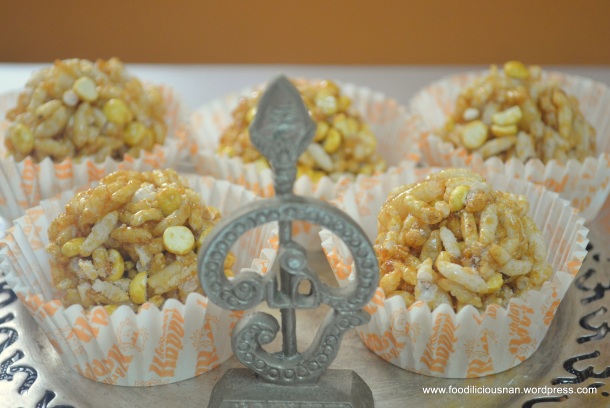 I have fond memories of celebrating Karthagai in Delhi. Karthigai is a Tamil festival which is basically a celebration of the month of ‘Karthik’ of the Lunar calendar) and falls in December, a month or so after Diwali. It is a festival of lights, somewhat like Diwali/Deepawali (another festival that celebrated ‘good over evil’ with lots of lights). Pori Urundai (Puffed rice balls), a laddu-like thing made with jaggery and puffed rice, is prepared and offered to  Lord Karthik (Murugan), the younger son of Lord Shiva.

During the first day of the Karthigai month, we used to light loads and loads of earthen lamps filled with oil on the low boundary wall all around the house late in the evening. We even lit one lamp in each room of the house, including bathrooms. I remember the earthen lamp count going as high as 4 dozens one particular time. On subsequent days of the month just two lamps on either side of the house entrance gates would be lit.

I’d always offer to line the boundary walls with the oil-filled lamps and light them. It used to take the better part of half an hour to finish it all. Even if it could be done faster, I’d do it all slowly. The fun part was when passersby would ask why I was putting out so many lamps. “Diwali toh kabki khatam (Diwali is long gone),” everyone would exclaim. And, assuming an air of importance, I’d tell them that it was the beginning of Karthigai.

Winter is quite cold in Delhi (in northern India), where I grew up. Fog would start setting in by around 7 in the evening. And it was around that time tht we’d set the amps. can you imagine how pretty it would have been? You could see just a couple of feet in front of you, everything else was just a cloud of white. And then, as you neared our house you could see a row of little twinkling lamps. It looked really wonderful.

Even today I know hardly anything about the why and how of this festival, except that it is for Lord Karthik. I now live in Chennai (a southern Indian port town) and we celebrated the festival with lots of lamps and sweetmeats, but I will forever remember Karthigai as a row of twinkling lamps on foggy nights.

Note: There are 2 types of pori: one called aval pori (the one I’ve presented here, known as murumura in Hindi) and another called nel pori. I don’t know how these are referred to in English. Do you know?

Smash up the jaggery into smaller bits

Add water to jaggery and put to boil in a heavy bottomed container on medium heat till jaggery melts. Remove from heat and let this stand for a while. Filter to remove impurities

The jaggery syrup needs to get past the three string consistency stage. If you take a drop of this syrup between your index and thumb finger and separate them, you see three strings streching between them. Another way to check if jaggery syrup is thickened enough and ready is to put a drop of the syrup into a bowl of water. Once out of water, you should be able to form a ball by rolling it between your fingers. My grandma also says that if you throw this ball, it should make a noise when it hits something. What this basically means it that it should be hard enough on cooling

From here you have to work really fast. Remove the jaggery syrup into a big wide vessel. Add cardamom powder and mix well

Dump all the puffed rice into  the syrup

Grease your palms with ghee and mix well

Grease your palms again and start pulling out lumps of the sticky puffed rice and roll into golf-sized balls quickly and place on a plate. This is called pori urundai. You do not need perfect balls at this stage

When you’re done with the entire pori (puffed rice) this way, pick up each urundai (ball/laddu) and press well with both pals to form as tight a ball as you can. This is important, otherwise the urundai will break apart on cooling

Let cool completely and store in an airtight container. This will keep for a couple of weeks